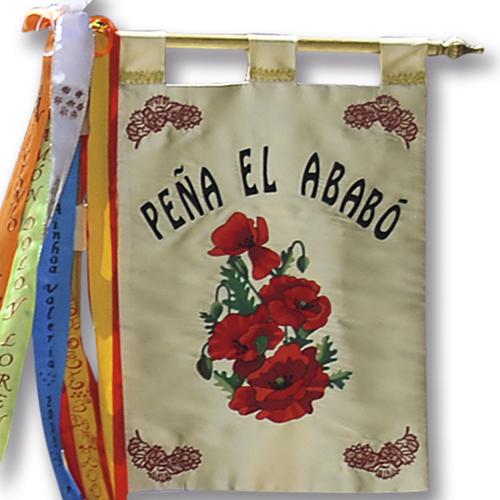 Peña “El Ababó” was set up during a dinner among friends who wanted to participate in the Saint Isidore festivities. A few weeks before the festivities they made a float, participating with a cardboard tractor and a wooden house which they named “Granja del Ababó”. In 2006, the decision was made to make a float entirely out of "papelicos", placing a ladybug on top of a leaf. The following year they created a huge butterfly sitting on a pot. These creations only encouraged the Peña to keep improving their floats and in 2008, with a float which paid tribute to the “Templete de la Música”, which was located in the “Parque de las Palomas” (a park in Yecla), they obtained the “Mayor of Yecla” special award.

Awards won: In 2009, they made a float together with the “Ermita de Santa Bárbara”. In 2010, they made the old soda truck “La flor de Yecla”. In 2011, they created a huge wicker basket with flowers. In 2012, they joined the federation and achieved the 4th prize for the float entitled “Un Joyero con un calendario”. In 2013, their float was entitled “En la Plaza de mi pueblo”. In 2014, they achieved the first prize for the float named “Si vienes te enamoras”. A 5th prize was obtained in 2015, when they made a float with the facade of the modernist house on Calle España (current Banco de Sabadell). In 2016, they won the first prize with a float that showed the main parks and green areas of the city of Yecla. In 2017, they won an award with the float entitled “Auditorio Juan Miguel Benedito”. They did not enter the float contest of 2018. In 2019, they resumed the construction of their floats, creating a float which made tribute to the neighbouring village of Raspay, obtaining the 5th prize.

The Peña’s Queens and Ladies elected for the festivities: 2008, Adult Lady (Elisabet Serrano).