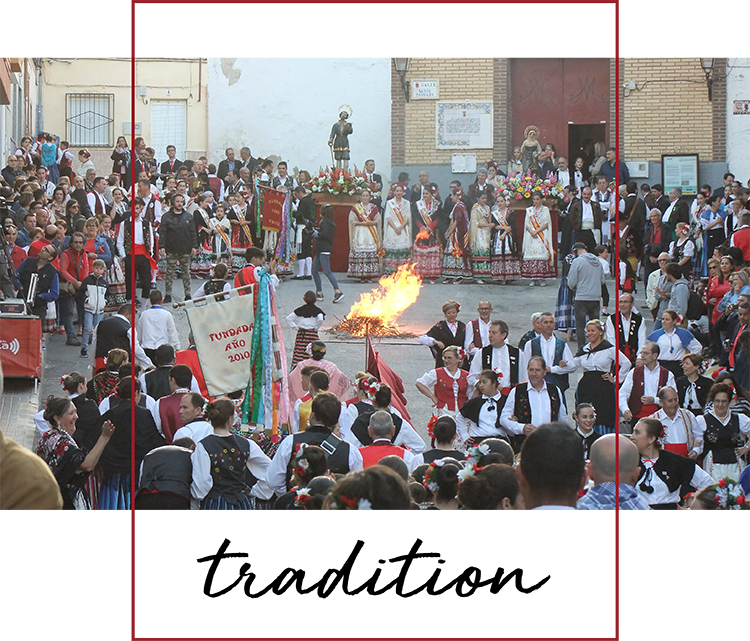 Us Yeclanos are simple folk and we love our roots and traditions. This is why we have made such an effort to maintain the essence of something we consider so important to us, The Festival of Saint Isidore. We had to find a way to pass on this spirit to future generations, so that they could also preserve the essence, magic and joy of our local celebrations.

Although the first steps had already been taken to create a festival committee in 1994, it wasn’t until the year 2000, with the rising popularity of our Saint Isidore Festivities, that the 'Federación de Asociaciones de Peñas de las Fiestas de San Isidro Labrador' was established.

Currently, the main purpose of 'la Federación de Peñas de San Isidro' is to coordinate the increase of clubs that are added to the celebrations every year, as well as to preserve the originality and tradition of the main events, so that the traditions are kept alive. To organise and develop the Saint Isidore Celebrations we rely on the collaboration and support of the Yecla Town Hall, through the Festivities, Culture and Tourism Councils, as well as the federated clubs.

Constituent bodies of the federation

"The Federación de Asociaciones de Peñas de las Fiestas de San Isidro Labrador” is made up of the general assembly and the board of directors.

The general assembly is the body that expresses the intentions of the Federation, which is made up of all The Associations of Federated Clubs, through its president and secretary.

History of the celebrations

Our celebrations of Saint Isidore are the result of Yecla’s devotion to the patron saint of agriculture.

The origin of Yecla's devotion to Saint Isidore began in the 19th century with the formation of the 'Real Empresa de Iluminación de Aguas de San Isidro' between 1816 and 1818. In Yecla, a group of 32 people decided to form a company for water extraction in the surrounding area of 'Cerrico de la Fuente', discovering a significant water source shortly afterwards.

The success of the project inspired the company in their worship of Saint Isidore the Labourer, commissioning an image to display in a shrine in the chapel of Saint Barbara.

During the celebration of the Saint's day, some simple acts took place. Late at night on May 14th, bonfires were lit at the doors of the chapel of Saint Barbara. Rockets and firecrackers were fired and bells were rung. On the morning of May 15th, there was a procession around the chapel followed by a solemn mass.

It was in 1941 when the so-called "Hermandades Sindicales de Labradores y Ganaderos" (Trade Union Brotherhood of Farmers and Ranchers) were created. They were constituted under the patronage of the saint from Madrid and they, together with the archpriest José Esteban Díaz, the Women's Section and the City and Country Brotherhood, were the founders of the San Isidore Festival throughout Spain, including in Yecla. Thus, in 1943, the Brotherhood agreed to acquire a carving of San Isidro from the alcoyan D. Miguel Torregrosa Alonso. This image arrived to Yecla on 14th May 1945 and the following day, 15th May 1945, the first procession was held. This was a historic day that gave rise to the current Saint Isidore Festival in Yecla.

Until 1948, the celebrations were fundamentally of a religious nature. In 1949 other elements started to be included such as the parade, the donations and exhibitions of local folk dancing. Although it was not until 1949 that there was talk of a "Grand procession", sung mass and "special programmes on the popular festivities". This is when a yoke of oxen was added to the parade for the first time, followed by the procession of three groups of women, young men dressed as farmers carrying the image of San Isidro and long lines of farmers and peasants.

In 1950 decorated floats were incorporated into the festivities, which still inspire the current floats (although the "papelico" technique would take another year to arrive). During the 50's, the Celebrations of Saint Isidro in Yecla were hugely popular and splendid occasions.

In 1952 the famous Battle of the Flowers and the Float Contest were introduced into the festivities. Flowers, sweets, confetti and streamers were thrown from the floats and balconies of the houses. The first awards ceremony was also held for the best decorated vehicles and animals, as well as for the farmers dressed in local costume. Since then, the number of prizes on offer has increased, donated by both official bodies and private companies.

A fascinating fact is that during the 70's, citizen participation dropped and even caused the celebrations to disappear in 1977. Luckily, in June 1979 they started up again.

All the historical data of the Festival has been extracted from the book:

In 1941, the so-called "Hermandades Sindicales de Labradores y Ganaderos", which were constituted under the patronage of Saint Isidore, were the founders of the Saint Isidore Festival throughout Spain and Yecla. In 1943, The Brotherhood of the City and the Country commissioned a carving of Saint Isidore from the alcoyan D. Miguel Torregrosa Alonso. It arrived in Yecla on May 14th 1945 and the following day the first procession was held. This was an historic day that gave rise to the current Saint Isidore Festival in Yecla.

Shortly afterwards, between 1951 and 1954, the first image of Santa María de la Cabeza was paraded. This was replaced in 1957 by the current image that is kept in the Basilica of La Purísima.